My fitness journey with GoodGym

Hear from Bernie on how she has progressed from doing no exercise, to preparing for three 5km races this year!

When I heard that a weekly running group for people with a learning disability was starting at Mencap National Centre, where I work, I was keen to join up.

As I hadn't been doing any physical exercise prior to this, I found the running quite hard for the first couple of months, but I tried to work hard to improve during every session.

Having signed up for three 5k races this year, I knew I needed to step up my training even more than just going to running club. So when staff at Mencap National Centre were offered the chance to take part in some running and bootcamp sessions with GoodGym, I jumped at the chance.

Over April and May of this year, GoodGym came to Mencap to hold 6 free workout sessions, of which I took part in 4. The sessions involved a mixture of walking, running and working different muscle groups in our bodies. I found some of the exercises hard, but our trainer, Joel, was really good at providing alternatives that I could do. 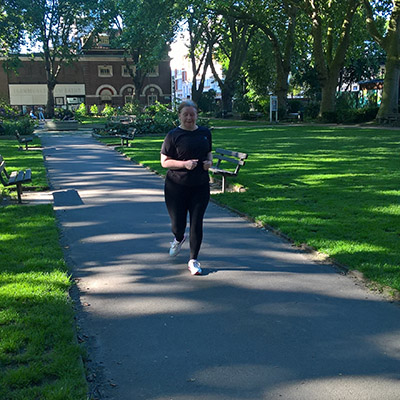 Over the course of the weekly sessions I learnt a lot about different exercises I can do to help with my fitness. It was also really fun, and a great opportunity to get to know other people from different departments at Mencap in National Centre.

My favourite new exercises that I tried were squats, skipping sideways and marching on the spot.

If anyone gets the chance to workout with GoodGym, I would really recommend it.

I've found that by taking part in the GoodGym sessions my fitness has really improved. Last week at running group I did my longest distance in 30 minutes!

I am really looking forward to continuing on my fitness journey and getting my personal best times in the 5k races that I'm taking part in later this year.

Joel from GoodGym who led all of our sessions said:

"I really enjoyed our sessions. It was great to have such a motivated and engaged group really working hard on each and every session."

There are a number of ways you can get involved with GoodGym.

If you're part of a Mencap local group or service, and are based in London, GoodGym can provide free exercise sessions, similar to what Bernie took part in at National Centre.

If you're interested in arranging this please contact Joel Wiles on joel.wiles@goodgym.org or Ed Field on ed@goodgym.org.

GoodGym are also based in 32 regions across the UK. They arrange mission runs which involve runners going to a certain place to help older people or community projects with different tasks. If you're part of a local group or service and would like some help with a task (e.g. maintaining your grounds) get in touch with Ed Field at ed@goodgym.org to see what GoodGym can provide.

Take a look at GoodGym's website to find out more: www.goodgym.org

If you're interested in challenging yourself and improving your fitness, why not take a look at some of our events?